With bellowing exhausts, iconic bodywork, and searing rainbow hues, nothing quite fits the supercar moniker like a Lamborghini.  Seeing just one on the street is a rare treat, but when dozens of Lambos unite, it can only be the circus of rolling wonderment that is BullFest.

An established annual Lamborghini event held in the NY tristate area for the last seven years, the seemingly endless spell of winter cold called for a slightly different flavor of this year’s BullFest in a unanimously praised decision to gather in the warmth and splendor of Miami, FL.

As soon as the event was announced, strong support from frozen local owners saw over a dozen NY area Lamborghini’s shipped down to Miami to enjoy a much needed respite from the ice and potholes.  With the support of Lamborghini Miami as title sponsor the event attracted over 60 Lamborghinis!

The morning of BullFest threatened with even more rain, but it proved to be a typical Miami shower, and all was dry and sunny for the rest of the day.  The cars started arriving early at Lamborghini Miami and were parked according to model, displaying the world’s most visually arresting example of chronology.  Everyone was treated to a breakfast, took plenty of photos and got better acquainted with fellow Lamborghini owners. 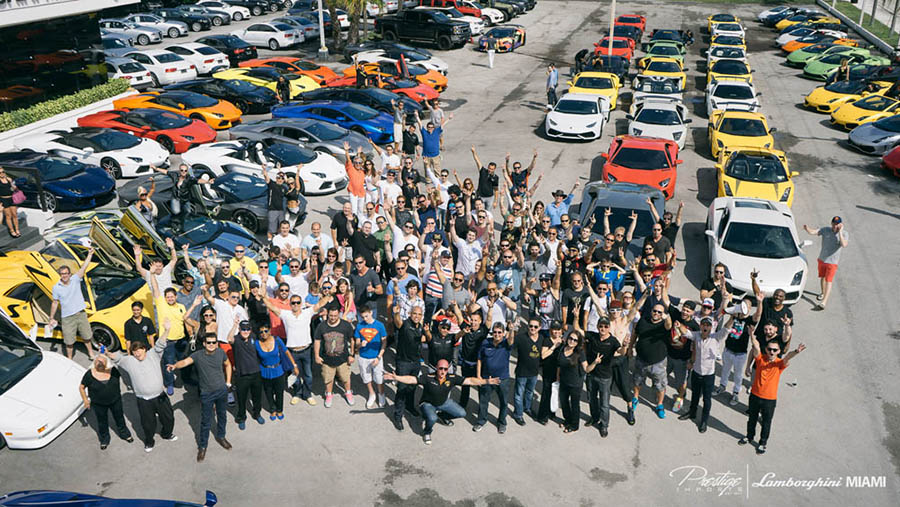 Following breakfast and a drivers meeting, Lamborghini Miami helped to block Biscayne Boulevard to ensure that the entire group could get on the road together.  What followed was an incredibly fun drive aided by the magical combination of beautiful weather and light traffic.  The rest stop proved to be quite a scene as 60 Lamborghinis pulled in together, completely taking over the area and convincing every child in sight that dreams do come true.

After the rest stop, a trip across the aptly named Alligator Alley brought the group to Naples Bay Resort for a delicious lunch.  The drive back to Miami went through the incredible Everglades National Park where the dozens of Lamorghini’s stood in stark contrast to the prehistoric feel of the landscape.

The day ended at Paramount WorldCenter in downtown Miami with a reception and presentation on the amazing growth and development of the city of Miami and what is in store for the future of downtown as it rapidly grows into a major global hub.

This year’s BullFest was a massive success and brought together Lamborghini owners from many corners of the country, and even Canada.  Everyone is extremely excited for BullFest|2016 Miami Edition.

Huge thank you to the sponsors of BullFest Miami: